Harvey Biljon has had a very successful career in rugby up to this point. I was lucky enough to catch up with the Jersey Reds head coach, with the South African national talking about the many successes he has had in rugby, and what his aims are for the future, both with the Reds and personally.

With rugby being South Africa’s prominant sport, as football is for England, it was a matter of when and not if Biljon was going to start playing the sport. On getting started in rugby, Biljon stated that he ‘was lucky as his dad and uncle were always into sport, so I would be in and around them.‘ He continued ‘I was introduced to rugby in school early on, maybe under 9s/10s so it went from there really.‘

Biljon went on to play for London Wasps, which he says came ‘out of the blue‘, in his playing career, he enjoyed a very successful seven years there. He explains ‘I was playing in South Africa for Sharks u21 team, went up to the Golden Lions in Johannesburg when an opportunity arose to play overseas and I had a friend who played at Wasps at the time. Nigel Welborn was in charge, I went across and did a trial and then got offered a contract.’

On his time at Wasps, he said ‘I was very lucky. It was a team full of international players, and at the time the club went through a very decent spell, we won the Premiership three times, the European Cup and the European Shield, so I was very fortunate to be a part of that.’

On how it felt to be involved in such a successful, trophy winning side, Biljon said ‘At the time you don’t absorb it all, as much as you should, because you’re just playing and you’re trying to compete for a position in the team, but when you look back at it now, those experiences of being at Twickenham playing in big games against Gloucester or Munster or even Biarritz at the time, playing in front of those big numbers it makes you think how fortunate you were. I say to the players now, you’re so lucky to be a professional sports person so when you get that opportunity, grab it, don’t let anything slip or take it for granted‘. 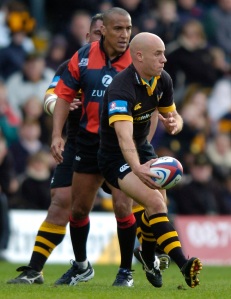 Now coach of Championship side Jersey Reds, I asked him if he felt his career as a player has helped with his coaching role. He answered ‘Definitely, my own personal position was a scrum half, so that means our scrum halves here get a hard time as I have been in those situations so I can empathise. But it’s more about dealing with those pressure situations, knowing the game from different perspectives, that helps with the coaching.‘

He goes on to suggest that because he wasn’t always a starter, having the likes of Matt Dawson starting in front of him, has helped him aswell. ‘I had a lot of time to analyse both what we were doing and the opposition, especially in training as we always had one set of players who were going to be in the team on the weekend, and I was always put in as opposition, so it gives you a sense of how you think the game should be played.’

Biljon didn’t know if he wanted to stay in rugby after his playing career ended, stating ‘Just before I got my first professional contract I was training to be a teacher. I think I always wanted to be a sports coach, because even when I was leaving school I was coaching junior age groups, whether it be cricket or rugby. With rugby the progression happened naturally and it’s just the way it unfolded.’

I then asked him if he finds it difficult dropping players, after knowing how that disappointment feels from his playing days. ‘It becomes easier over time. When you start it’s difficult, but you tell the players the proverbial ‘s***sandwich’. You give them some good, then the bad news and then end with a bit of good. As a player, I wanted that information and then I needed time to absorb it, and then go back and ask questions about the decision afterwards. Now I try and be honest with the players, I will tell them if they are not in the team, give them the reasons and also the opportunity to go away and then ask questions. The bottom line is we have to make decisions which we feel are best for the team, and sometimes you have to put your hands up after and say that probably wasn’t right, but its all part of the job.’ 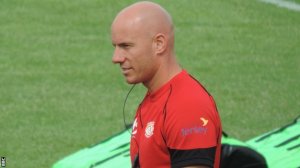 Talking about how he’s enjoying living on the island of Jersey and managing Jersey Reds Biljon said ‘I love Jersey, the place, it’s beautiful and is perfect for my family. As for the rugby it’s a rollercoaster. Getting here when we were bottom of the table, and saving the team from relegation has to be up there with the best moments in my coaching career, because of how much I learnt about myself, the players and getting the best out of the team in such a short space of time.’

He continued, ‘Then the process of developing Jersey Reds as a stable Championship side has been hard, but it’s an exciting project. I think the success of putting time into the players and helping them achieve their goals, whether that’s going to the Premiership or international rugby has been a major factor in me enjoying my time here. Realistically as a club it’s unlikely we will be playing Premiership rugby next season, but if we can get players to step up to the next level then that would be good. That always comes with a challenge as well, as we usually have a big turnaround of players.’

With Jersey Reds having teams such as Gloucester and Harlequins playing in Jersey during pre season, with both also seemingly enjoying Jersey nightlife a bit too much, I asked if having Premiership sides over is a bonus for the team. ‘It’s great for the players because they get to see first hand how a Premiership team functions and operates and they engage themselves playing against the players in their position, physically and mentally, I think those things are massive. For us, as a coaching team, we are always looking at different ways to progress and learn.’

And he had a say on the Reds’ fans. ‘I like the way the supporters are right on top of the field, if I came here as a fan and could hear the impact of the tackles I would feel part of it. I like the banging of the boards and more recently the ringing of the bells, it’s been really really good. There is a great atmosphere and it’s good for the team.’ 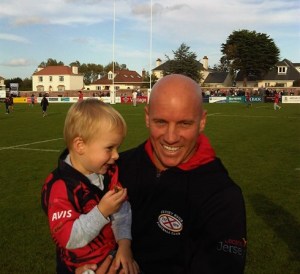 Asked if any Jersey born reds will be playing for the first team anytime soon, Biljon said ‘We keep losing them! Like James Voss going off to Leicester and Coventry. I think we are monitoring four or five players in the Athletic side, we would like to see them come through. I think for us we have to try and keep a connection with Jersey born players because I think there is a natural cycle here that we miss out on. They finish school and go straight to university, I think those young men need to experience life off island, get their education but continue playing their rugby. Once they go off island, it’s sometimes hard to get them back as they could go down many different paths. I don’t know if there is a way we could connect it all, so they could be with us and study, because I would like to see more Jersey born players involved.’

The amount of support rugby receives in Jersey is a huge bonus for the team, so I asked Biljon whether he felt the same should be done for other sports. He responded ‘I actually think the participation in sport as a whole in Jersey is very healthy. Whether it be cricket, hockey and even people getting out on their bikes and running, it’s an active island. I’d like more supporters and more involvement around rugby naturally because I want it to keep growing. But across the board, different sporting groups, whether it be football, hockey or whatever it might be, I think they should drive their own ambitions. The most important thing is if they ID talented individuals, they give them as much support as possible to keep pushing, because even if they go off the island, they are still representing Jersey.’

Finally, I asked him what his goals are for this season for the Reds, and for himself in the years to come. ‘We don’t set end of season goals, because we look at the end outcome and not where we need to be. We look at how we are developing and learning week in week out. I want us to continue to build, and each year we have made improvements in every area. We would like to continue to push players to the Premiership, that’s a big one for me. And personally make sure the team keeps on doing well here, ultimately yes I want to coach at the top level but if I worry about that I won’t be focused on what we are doing here.’

Whilst having played at the highest levels, Biljon was down to earth and an easy man to get on with. Jersey Red’s next game is under the lights at Stade Santander this Friday, against Yorkshire Carnegie. I wish Biljon and the team all the best for the season. 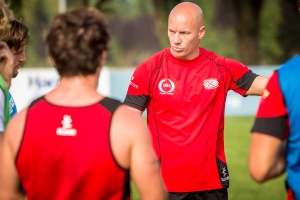