University of Chichester’s Racquets teams are in high spirits going into the second half of the first semester. A mix of experienced third years and established second years, along with many brilliant freshers has boosted the sides both in games and socially.
I talked to president Ben Skinner about his hopes for the Racquets, which include mens and womens badminton and tennis, as well as a mens table tennis side.

Skinner started off by stating ‘Obviously we don’t want any teams to go down a league. So the main aim is for all teams to stay or go up. But my aim is for each team to have individual goals.’

When asked about the University’s womens tennis side, he replied ‘Our Womens tennis side, I feel, are the strongest they have ever been having taken on some good freshers, as well as already having some talented players. I hope they will do well this year.’

Mens tennis gained promotion last season, after a magnificent run. Skinner said ‘Mens tennis, I hope will repeat their success of last year, and go up, but I know it will be tough for them as the league that they are in this year is a massive step up compared to last season.’

In what is a transition year for womens badminton, Skinner suggested ‘Womens badminton have a real mix of players but I hope the stronger players will help to push the less experienced players on, so as a whole the team are strong during the season.’ 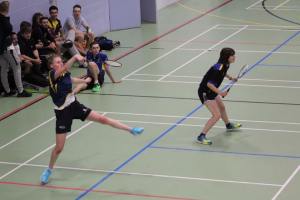 Skinner on his own sport said ‘Mens badminton has a strong team again, however it’s a tough league this season. The team has shown that they can compete as there has been a few wins and close scores so far, and again I hope the team remains in the same league come the end of the season.’

Like womens badminton, table tennis are in a transition period after losing the ever conquering Dan Pound and other key players. Skinner said ‘This is the toughest one as there is a real mix of players and being in division 1 is a massive achievement as we are such a small university. So again I hope they can pull out enough wins to stay in the same league.’

On the new journey that the University’s badminton 2nds are on, Skinner said. ‘This is a new experience for them as they are in a local league but I hope they will be strong enough to stay in the same division, but also gain some valuable experiences by playing a real mix of ages.’

UOC Racquets are on the up and I for one look forward to what this season brings for all the talented players who make up this family.