Considering Peter Vincenti has played at Wembley and against some of the biggest clubs in England, the likes of Manchester United and Leeds United, the experienced striker was keen to talk about the ins and outs of professional football and was as down to earth as he has always been, when I caught up with him last week.

Raised in Jersey, Vincenti played for St Peters FC throughout his junior years before having spells at various clubs in the EFL, he is currently playing at League two side Macclesfield Town. 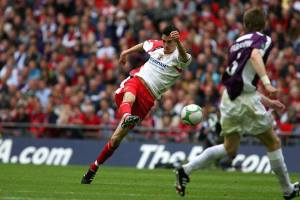 I asked him about how his life is, and what it’s like with his new born child having recently arrived. He said ‘Yeah, it’s been good, she is seven weeks old now. We are still adjusting as she’s our first one, but yeah everything is going as well as it can be at this time.’

‘I was always into football when I was younger’ states Vincenti. ‘Obviously I played for junior teams back in Jersey, coming through my youth years at First Tower. But with Jersey being an isolated place it was always a bit of a bubble in terms of who you played, facing the same people week in, week out. There were a few years when I was playing golf quite a lot, but football was always the main sport. Obviously my dad was into football locally, managing Sporting Academics, St Peters and Jersey so I kind of followed in his wake.’

Vincenti says he never had a moment when he knew he would make it to the big time. He said ‘I don’t really think I ever felt that. I never went through a youth system such as an academy, like a lot of players do in the UK. I played my football on the island, then went away to university, and I never really thought about it too much. It was a family friend from back home, Brian Foulser, who used to watch me for St Peters, he believed in me and set a trial up with Millwall. The trial went well, I was signed by Millwall and I have been in professional football ever since. My years at Rochdale were when I felt more comfortable playing the game’.

On moving away, Vincenti says the quality difference was ‘huge’. ‘When I was younger I played with some very good players technically, Jersey have always produced quite good technical players. However, once I got to the UK, the difference in mentality, the pace, power and strength of the players, was a bit of an eye opener. It took me a long time to catch up. There was a big difference between local football and the professional game.’

I continued on the same topic, asking if it was hard to move away to England. Vincenti answered ‘Yeah it was. I’ve never really been asked the question in interviews over the years, probably because you’re doing something you love and people think there are no real down sides to it. But yeah, moving away from the Island, it was hard. My family and friends are there, so you do miss out on a lot of stuff. It took me a long time to find my feet and feel comfortable living in the UK. I go back to Jersey in the summer, and even when I get a couple of days off here and there I try to go back, it’s nice to go home and you realise you do miss it. It was a privileged place to grow up in, but the fact I went to university for three years beforehand helped, if I hadn’t done that it would have been more difficult.’

Having played in many big games, and scoring an impressive number of goals, I asked Vincenti what his fondest memory in the game is. He replied ‘I don’t really think about the memories that much at the moment. It will probably be once I’ve finished my playing career that I will look back and think ‘that was something there’. Obviously playing at Wembley, playing against Manchester United, beating Leeds United (my wife is from Leeds so that was the most tickets that I have ever had to sort out for a game). Beating Nottingham Forest (scoring only goal), that’s a fond memory. My debut for Stevenage, with it being the first time playing in front of a crowd like that, in a proper stadium and it was my professional debut so it couldn’t have gone better for me. One that does stick out, though it’s not the biggest one on paper, was when I was at Rochdale and we played Leyton Orient away. We took the lead, they equalised and we had a man sent off. They then took the lead, and we came out in the second half and won the game 3-2 with ten men. The atmosphere after the game was amazing, it’s something that stays with you. A lot of the Leyton Orient fans applauded us off the pitch, which was special coming from opposition supporters. Promotion with Rochdale was amazing too. I would never be able to pick just one moment’.

I then asked about team morale, and what the best dressing room pranks that he has been involved in were. Vincenti stated ‘There are some I can’t really talk about, as a lot of the time what happens in the dressing room, stays in the dressing room. It’s a funny place to be. Grant Holt was a real character. I played along side him for a short time. He was funny. It’s an industry where banter gets thrown around all the time. It’s hard to pinpoint one moment, but yeah, some of them I wouldn’t be allowed to repeat.’

Having been at many different clubs, Millwall, Stevenage, Aldershot, Rochdale, Coventry and currently Macclesfield Town, I asked whether it has been hard moving around from club to club. ‘We’ve got used to it. I have been quite fortunate in that I haven’t had to move huge distances. When we moved to Rochdale it worked quite well in regards to relocating as my wife is from Leeds. The most recent one was probably the most difficult, leaving Coventry having bought a house there, was hard. That’s the nature of the industry I’m in, and it’s a side of the game that people probably wouldn’t think about looking in.’

Vincenti has scored many goals in the course of his career, I asked him how that feels. ‘It’s the best feeling in football. Especially if it’s an important goal. If you score and it has positive indications for the team then it’s an unbelievable feeling.’ I then asked him about fans chanting his name. ‘It’s always nice to hear them chant your name. That’s what you want rather than the abuse that you do get sometimes. They usual do it because you have done something good, it’s not quite the same as when you score a goal, but the feeling is very similar. On the abuse footballers suffer and how he deals with it, Vincenti states ‘It comes with experience. If you do something good you listen to the crowd, but if you do something bad, you can block out the reactions. It’s part of the game and sometimes for me, it spurs me on.’

Asked if he would ever play again in Jersey, Vincenti said ‘I don’t think I would make a point of moving back to Jersey to play football. I have lived off the island now for 14/15 years. My wife and I have discussed it and there is a possibility we might move back to Jersey one day. If I moved back I wouldn’t sign for anyone else but St Peters, it’s my club. If I was playing for them and then was selected for Jersey, of course I would play for the Island.’

Finally, on his future ambitions he stated ‘Obviously I am a bit older now, I hopefully have a couple more years left in me and we will see what happens in those years. I am doing my coaching badges now, so I am taking courses outside of football to try and prepare me for when I do have to finish playing. In football it is difficult to know what tomorrow will bring.’

A really interesting insight into the journey that Vincenti has been on, and into the professional game.

I wish Peter all of the best in the future and who knows, we may see him in a Jersey shirt again one day!